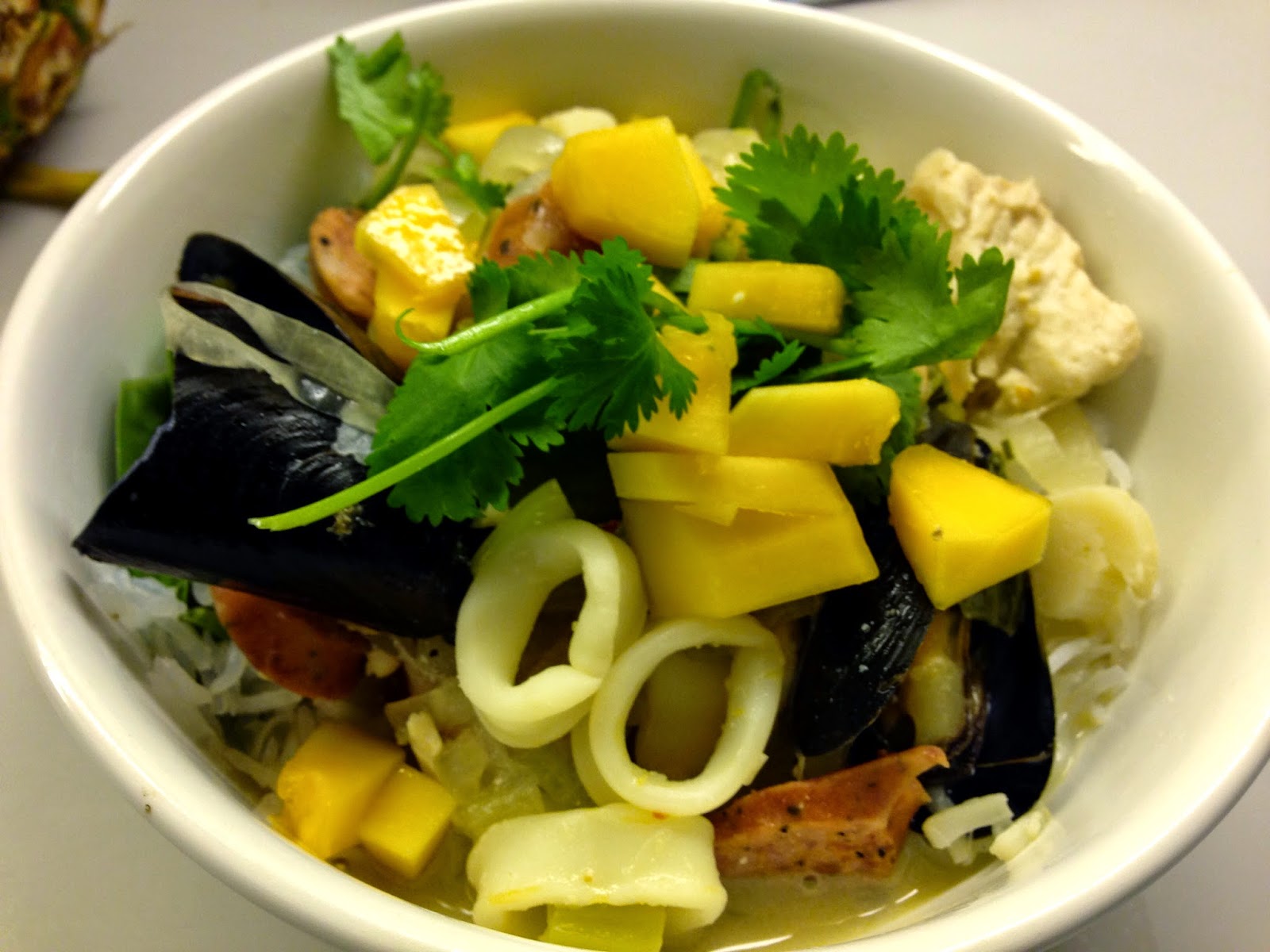 So, Jason used to make this amazing fish based stew that we called "Drunken Italian Stew"--it was bold and rich and really great with thick slices of garlic bread.  As we recently moved to Hawaii, we thought it was time to update this a bit (and I didn't realize that it's been so long since I've posted a recipe!).  We experimented last night and it was a hit!

2 TBS coconut oil
1 sweet onion, sliced into half moons
1 jalapeno, deseeded and sliced into half moons (you could definitely get away with a 1/2 of one, as ours was pretty spicy)
2 tsp minced garlic
1 TBS minced ginger
1 tsp Hawaiian pink salt (more or less, depending on your tastes)
8 oz Portuguese sausage, sliced (could omit if doing strict Paleo)
juice of 1 lime
1 can coconut milk
1 can chicken stock
1 TBS coconut aminos (a soy sauce substitute)
1 TBS McCormick "Asian" seasoning (optional, but I had it on hand, so I added it)
2 heads baby bok choy, sliced
2 lbs mixed seafood medley--mine was from Costco and had shrimp, squid, and mussels
1 lb Opah, cut into chunks (a Hawaiian white fish--could sub cod or other similar hardy white fish)
Couple of shots of white rum (optional--I didn't add it to mine, and it was just as good, but Jason enjoyed a shot in his bowl)
Chopped cilantro
Diced or shredded green papaya (optional, but added a nice sweet hit)

Heat coconut oil in large pan or pot (mine is one of those deep 18" saute pans that has a lid).  Add onion, jalapeno, garlic, and ginger and cook until tender, stirring often, seasoning with the salt.  Add sausage and  continue tossing it around a bit.  Add the lime juice, coconut milk, chicken stock, coconut aminos, and seasoning and bring to a gentle boil.  Add seafood medley and the Opah and cook covered until the fish is opaque and shellfish are open, probably about 10 minutes stirring occasionally. Add the bok choy about 5 minutes before you anticipate it being done so that it's just cooked through.

I served mine in a big bowl over Shirataki noodles (sooo, I'm not sure how 100% paleo those things are, but they're amazing and don't seem to have any "bad" ingredients in them--as long as you don't get the soy based ones--and they're calorie free), and garnished with cilantro and diced green papaya.  Jason had his over white rice and added a shot of white rum.  They had totally different tastes, but were equally delicious.

Posted by Meg No comments: