I think I finally nailed down a good Bolognese recipe!  I bought some pastured raised pork sausage from our local Farmers Market and put it to good use. 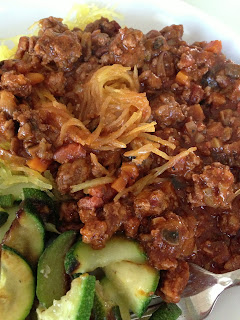 In a large saucepan, melt 1 TBS of bacon fat and saute onion, garlic, carrot, and mushrooms until tender.  Remove to a bowl.  Add the other TBS of bacon fat to pan and brown bacon, sausage and ground beef until cooked through.  Add veggies back to pan along with remaining ingredients and cook over low heat for a bit.  Serve over spaghetti squash.

We recently moved to the midwest, and I was craving something from back home.  Specifically, a good ol' peach cobbler.  I don't normally do much baking, and this is a far cry from my old canned peaches and biscuit topped cobbler, but it hit the spot (and made the house smell heavenly!).  It has honey and coconut crystals in the recipe, so it's not for the purists, but it's a nice once in a while treat. 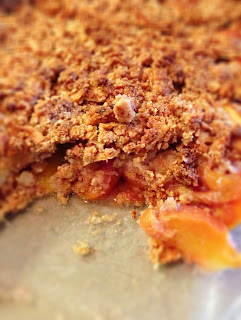 8 peaches, sliced
1/2 cup raw honey (I also tried using 1/4 cup, and while it was good, it wasn't quite sweet enough for what I wanted, but you can play with it)
1 tsp cinnamon
1 TBS vanilla

Preheat oven to 375.  In a small bowl, melt honey for about 30 seconds in microwave, then stir in 1 tsp cinnamon and vanilla.  Pour over sliced peaches and toss to coat.  Place peaches in baking dish.
Melt coconut oil in a large bowl for about a minute, until liquid.  Add remaining ingredients and mix well (I used my hands).  Press mixture over peaches.  Bake for 30 minutes.
Posted by Meg No comments: