I think I've probably made a variation of this recipe before, but this one is super simple and doesn't require many crazy ingredients. You can change it up depending on what macros you need (i.e, add chopped peanuts if you get lots of fats, serve over rice instead of in lettuce wraps, etc.).
Makes about 4 servings
Per 4 oz of turkey, veggies, and 1/4 of the sauce:
241 calories*10g net carbs*9g fat*29g protein 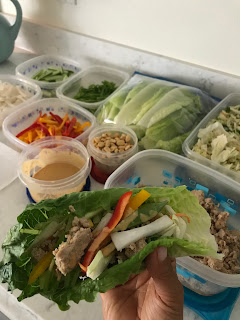 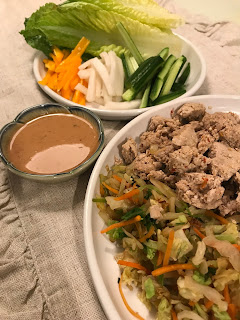 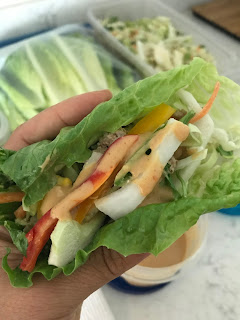 Posted by Unknown No comments:

It seems like there's a lot of interest in Meg's Meals (do I need to come up with a different name?) and I'm working out the kinks on making it a reality. I'm trying to put together complete meals and using some my friends from my box to test them out. So far, so good! One of the meals that I made was from the Renaissance Periodization Cookbook and got really good reviews.  I added a few extra spices, but basically stayed true to the original recipe. They would prefer that you go to their link if you would like the details. ;-) I also made up a side of quinoa, which I haven't used much of, so I'm glad that it was well received (even Harper ate it!). 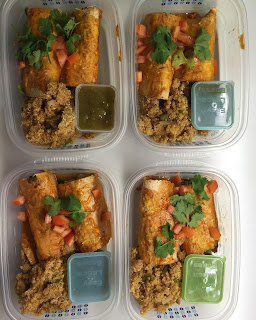 Make quinoa according to package directions. Meanwhile, saute peppers and onions in a large sauce pan sprayed with non-stick cooking spray until tender. Add quinoa and spices and combine.
Posted by Meg No comments:

I've always been a big advocate of meal prep (going back to way before I started this blog however many years ago). It's not that difficult, it just takes some planning and a chunk of time to devote to it. An added challenge when doing RP is being able to keep track of your macros and tweaking things to make it "fit". I'm working on trying to figure out how to offer my services (Meg's Meals?) for meal prep in a way that a) I won't go crazy and still enjoy doing it for my own family b) it makes it worth my time and c) is streamlined and simplified. In doing so, I've enlisted the help of a few guinea pigs at my box to test out recipes. Today's meal is an updated version of the Stuffed Peppers I used to do while we were deep into Paleo.  Let me know how you like it! 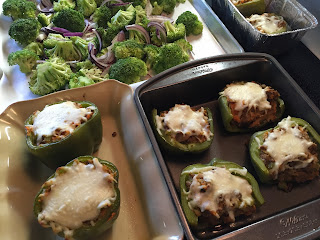 Cut tops off of bell peppers and de-seed (I chop up the tops and save them for other uses). Fill a large pot with about 1 inch of water and place peppers in (cut side up). Bring to a boil and steam for about 5 minutes. Remove from pot and slice each pepper in half (you might need to let it cool first) and place in casserole dish.

Fill each pepper half with 3 oz of filling and top with 18g of cheese (if you're not counting macros, then you don't have to be so exact). At this point you can cover and refrigerate until you're ready to eat 'em. Back at 350 for about 20 minutes, until filling is heated through and cheese is melted (probably longer if they've been refrigerated, but keep an eye on the cheese).

I served mine with roasted red onions and broccoli (lightly mist with coconut cooking spray, S&P, garlic powder). If you need to add fats, guacamole would be really good added to them!

I didn't realize that it's been so long since my last post. Over a year. No real reason other than the fact that I haven't been very creative in the kitchen and because, well, life.
Over the last few months I've made a lot of changes to my nutrition and fitness program. I joined a new CrossFit box (Arkaios CrossFit holla!) and have started using Renaissance Periodization's auto templates for my diet, as well as adding in one of their physique templates (bro lifting, lol). I finally feel well fed, my performance is improving, my body seems to be changing for the better, and most importantly, I'm having fun. In doing so, I'm still eating mostly whole foods, but concentrating more on macros and timing. I'm going to attempt to write more regularly here, especially as I go into a maintenance phase of the program.
One of the things that I make regularly are these little muffins. They're from Kodiak Cakes, but I tweaked the recipe a bit to make it a little more macro-friendly. 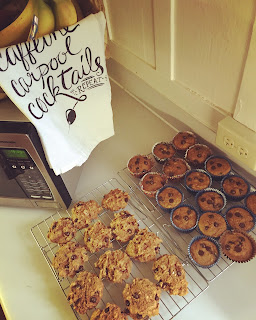 Mix everything up in a large bowl. Line muffin cups with liners (the foil ones work the best) and fill. Bake at 350 for about 15 minutes. That's it! 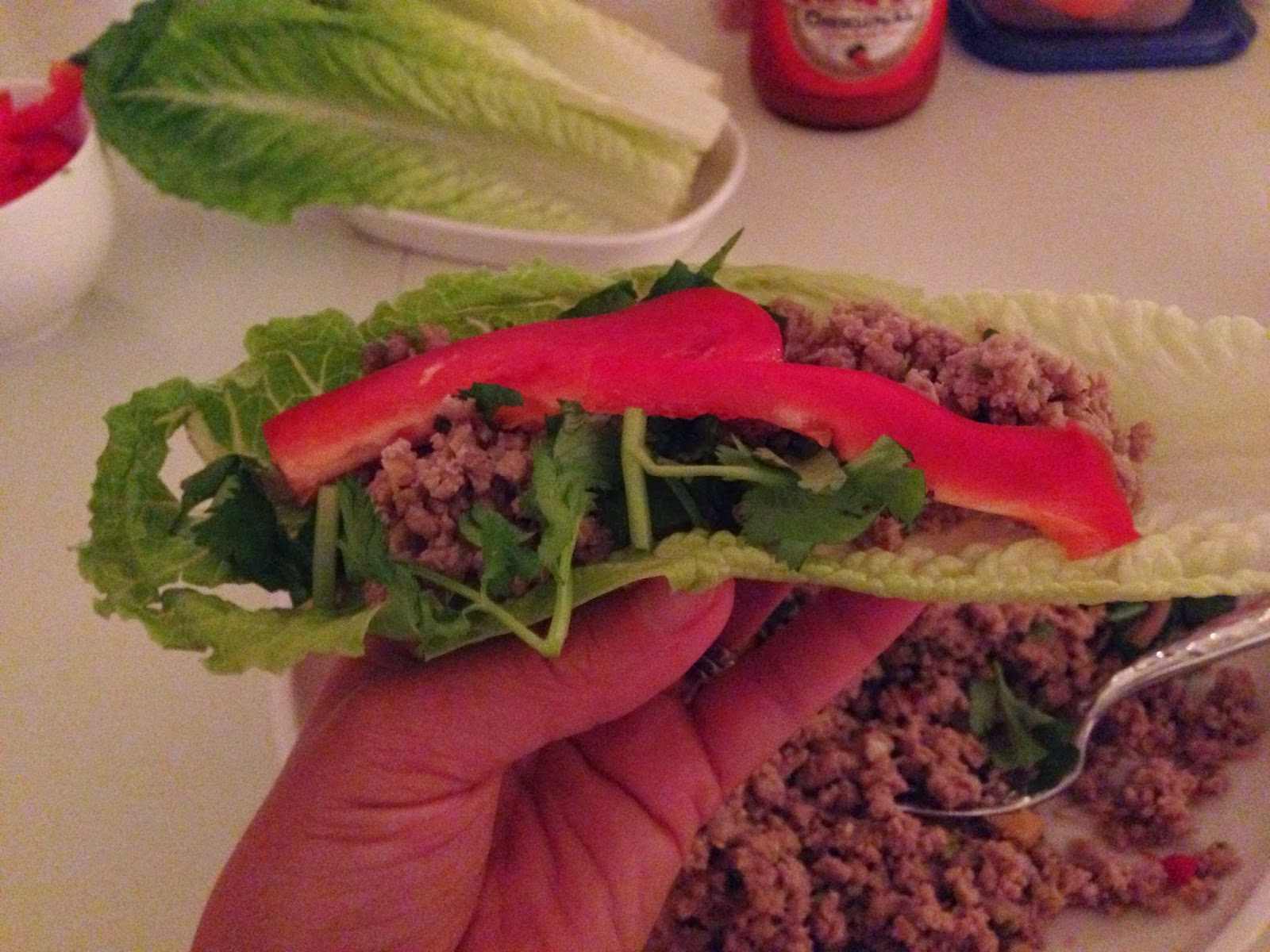 Our friends Amy and Greg came over for dinner a few weeks ago and they brought "larb" with them--it's a minced meat salad (don't let that throw you!) that's considered the national dish of Laos.  It was delicious--the herbs and citrus and spice mix is so complex. We gobbled it up and ever since then I've been wanting to recreate it.  Here's my go at it:

1lb ground turkey (I'm sure you could used ground beef, pork, or chicken or a combo)
1 stalk lemongrass--white part only, finely chopped (probably not a deal breaker, but I had some in the fridge and was excited to use it)
3 cloves garlic, finely chopped
1 "nub" ginger, finely chopped (probably about 2TBS)
1 red chile, finely chopped (you can take the seeds out or not, depending on your heat preference)
stalks from 1 bunch cilantro
zest of 1 lime
juice of 1-2 limes (we found we wanted a bit more than what I added)
3 TBS Red Boat fish sauce
3 TBS coconut aminos
1 TBS coconut oil
chopped cilantro
chopped mint (don't leave out--it really rounds out the flavor!)
lettuce leaves, julienned red bell pepper, carrots, and cucumber to serve

1) Chop lemongrass, garlic, ginger, chile, cilantro stalks and combine in small bowl.  Add lime zest.
2) Heat coconut oil in a large skillet over medium heat.  A ingredients from step 1 and cook for a minute or two, stirring often and careful not to burn.
3) Add ground turkey and cook until no longer pink.
4) Add lime juice, fish sauce, coconut aminos and stir to combine.
5) I served ours in lettuce leaves with some julienned veggies and chopped cilantro and mint. 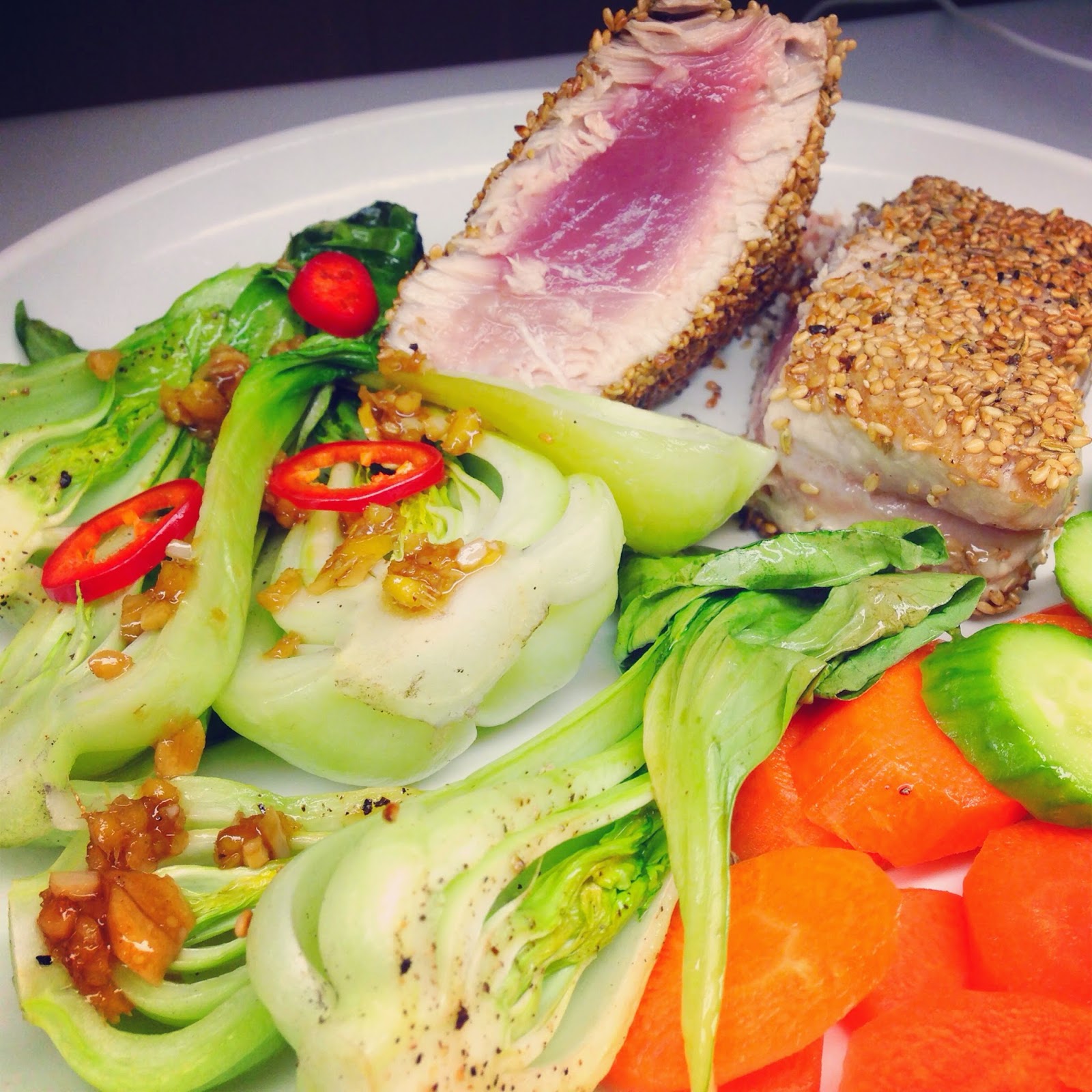 We're on Day 6 of a W30 and needed something...different.  This dish lived up to that! As my husband said, "this has everything!" (a la Daniel Tosh, which is why we'll probably end up referring to this as "Tosh Tuna").We live on Oahu, so fresh fish is readily available--we will be taking advantage of that much more often now that I know it's so easy!

Mix fennel seeds, ground mustard, ground pepper, salt, and sesame seeds together in a small bowl and then pour onto a small plate so that it's an even thickness.  Heat coconut oil in a pan (I used non-stick) over medium high heat until pan is nice and hot.  Dredge each side of the tuna steak in the sesame seed mixture and place in pan.  I cooked mine for about 2 minutes per side (maybe a little less), but you can cook it longer if you don't like it rare. Serve with Ginger Glazed Baby Bok Choy and sliced carrots and cucumbers.

In a small bowl, combine coconut aminos, ACV, and sesame oil. Heat oven to 400.  Place 1TBS coconut oil in a roasting pan and place in oven until oil is melted (it won't take long).  Remove from oven and place bok choy in the pan in a single layer, cut side up.  Roast for about 6 minutes until just wilted.  While it's roasting, add 2 TBS coconut oil, garlic, and ginger in a small pan over medium heat and cook for about 20 seconds being careful not to burn.  Add the coconut amino mixture and continue to cook for a few minutes while the bok choy finishes roasting.  Drizzle the sauce over the bok choy to serve. 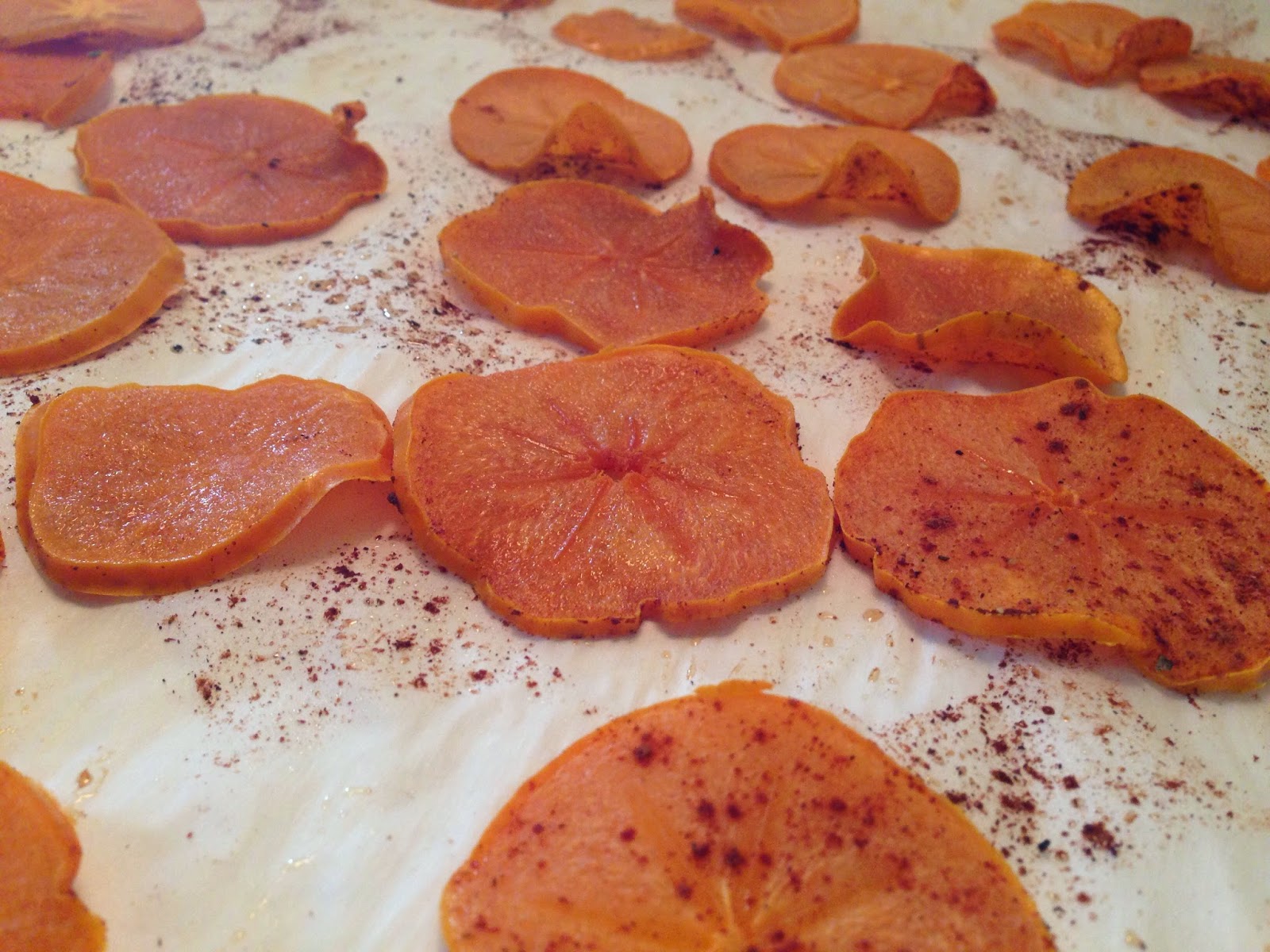 Even here on Oahu, persimmons are in abundance in late October (at least at our commissary). We've been eating them raw, either like an apple or peeled and sliced over a salad.  I wanted to try persimmon "chips".  So easy, and quite delicious.

Preheat oven to 350.  Slice your persimmons (I used my scary mandoline) thinly.  Put on a parchment paper lined cookie sheet (I sprayed mine with coconut oil) and sprinkle with sea salt, pepper, and cinnamon.  Bake for 10 minutes, flip, and bake for 10 minutes more.  At this point, I decided I wanted mine more crispy and did 1 min per side on High Broil.
Posted by Meg No comments: