I had almost forgotten about one of my family's favorite recipes from the pre-Paleo days, as we hadn't made it since we pretty much cut out most breads, cheeses and pastas.  I realized the other day that it would be super simple to "paleo up" and so I did. 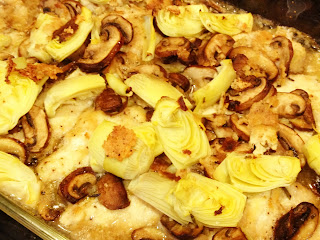 About 8-10 chicken tenders (a package or so, although I used frozen ones this time--if you do use frozen, just rinse the ice off first--no need to thaw)
3/4 cup almond flour, seasoned with garlic powder, onion powder, salt and pepper
1 package baby portabello mushrooms, sliced
1 tsp freshly chopped rosemary
1 can chicken stock
1 can quartered artichoke hearts, drained
Olive oil

Preheat oven to 375.
In a large skillet, heat olive oil over medium heat and add mushrooms (you can season with salt and pepper, garlic and onion powders if you'd like) and rosemary.  Sautee until tender.  Remove from skillet and set aside.
In the same skillet heat a little bit more olive oil.
Place almond flour in a baggie along with seasonings.  Add rinsed chicken tenders and shake until coated.  Add chicken to pan and cook until just browned on each side (you don't have to cook it all the way through).
Place chicken in a baking dish and top with mushrooms and artichoke hearts.  Keep the pan over heat and add the can of chicken stock, scraping up the brown bits.  Let that simmer for a few minutes and then pour the chicken stock over the chicken.
Bake for 30 minutes.
I served mine over zucchini "pasta". 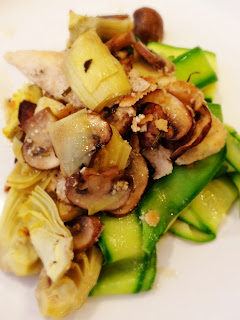 Heat a pot of salted water until boiling.  Wash zucchini and use a vegetable peeler to slice into thin strips (I found that it was best to cut off one end and do one side until you couldn't get a strip any more and then turn it over and do it again).  It seems like it would be time consuming, but it's not that bad.  Add zucchini to boiling water and boil for about 1 and a half minutes until just tender.  Drain well.  Ta da!

I usually try to grab a pork roast when it's on sale at my local grocery store (I know, it would be much better to buy from my local butcher, but most of the time it's just too expensive to do so).  I prefer to cook pork in my crock pot, just because I can do the prep work and then forget about it for a while.  I wanted something crunchy with it, so I picked up some nice red cabbage and had a jalapeno and some cilantro in the fridge.  Figured it couldn't be bad!  What I liked about the pork is that it was super moist and didn't have that "crock pot taste".  It had a nice little tangy thing going on, which went perfectly with the subtle heat from the slaw. 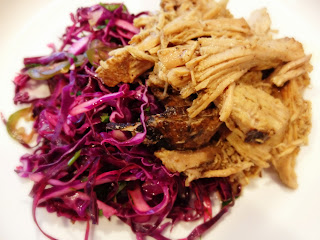 Place olive oil, vinegar, seasoning and garlic in a plastic bag and mix well.  Add pork, seal bag and marinate overnight in the fridge.  In the morning, place pork and marinade in crock pot and cook on low for about 7 hours (give or take, depending on your crock pot).  Once done, shred and mix with marinade.
Serve over cabbage slaw.

Mix all ingredients well and let sit for a few hours.  The cabbage will turn a really pretty purply pink color.  If you like a sweeter slaw, then add a little bit of raw honey to the lime juice before adding to the cabbage.

You all know I like a good bowl of food.  I tried to up the ante with cauliflower yesterday and it was super delicious.  I had grilled some steak that I used for this recipe, but you can also use whatever protein you'd like on it. 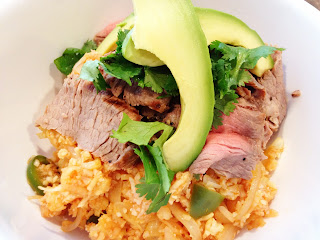 Grilled chicken or steak (I used flank steak, seasoned with S&P and grilled for about 5 minutes per side, and then thinly sliced against the grain)
1 head of cauliflower
2 TBS Olive oil
2 cloves minced garlic
1 onion, sliced
2 jalapeno peppers, sliced into rounds (I like things spicy so I used the whole pepper, so you could add less if you desired)
8 oz can of sugar free tomato sauce
1/2 tsp sea salt
1/2 tsp cumin
Fresh cilantro
Fresh avocado

"Rice" cauliflower by grating it or putting it through a food processor.  Place "rice" in a large bowl and cover with plastic wrap.  Microwave for about 4 minutes.
In a large pan, heat olive oil over medium heat and add onion, garlic and jalapeno.  Once they are soft, add the cauliflower and cook for about 5 minutes or so, stirring often.  Add the tomato sauce and spices (you can customize to your liking) and cook for another 2-3 minutes.
To serve, place the "Mexican Rice" in a bowl and top with steak, fresh cilantro and sliced avocado.
Posted by Meg No comments:

This will be on my repeat list, for sure!  It's got that creamy, garlic-y, satisfying thing down pat! 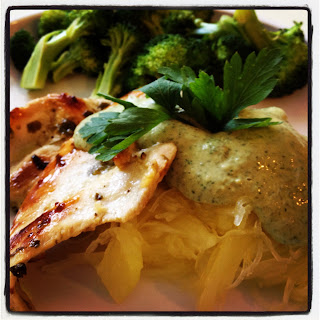 1 Spaghetti Squash, baked whole for about an hour at 375, and then cut in half and "spaghetti-fied"

Combine parsley, lemon juice, EVOO, Capers, garlic and S&P in a bowl or plastic bag.   Add chicken and marinate for at least 30 minutes.  Once you are ready to cook, heat EVOO in a large pan and saute chicken until done and a little browned. 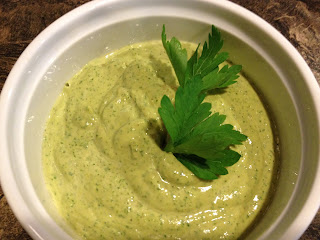 Place all ingredients except for water in a food processor and blend.  Add water as needed to thin.  This sauce would be great on a variety of dishes!

To serve, place "spaghetti" on plate with chicken and top with sauce!
Posted by Meg No comments: