While technically not Paleo, I thought I'd give this recipe a try, as it seemed pretty "clean".  I thought it was quite good....but it wasn't as big of a  hit with my little ladies as the bacon wrapped tenders.  I got the recipe off of wittyinthecity.com, which calls it "Man Pleasing Chicken".  You be the judge! 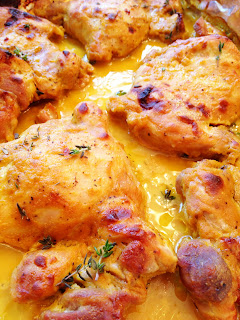 Preheat oven to 450.  Place chicken thighs in a foil lined baking dish and season with S&P.  In a bowl, mix mustard, maple syrup, and rice wine vinegar.  Pour  over chicken and toss to coat.  Bake for about 40 minutes, basting with sauce about halfway through.  Let rest 5 minutes and sprinkle fresh herbs over the top.
Posted by Meg No comments:

You know it's good when your daughter asks for you to put it in her lunch for the next day! 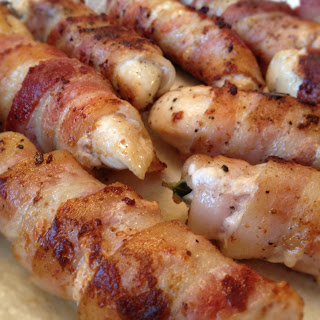 I got this recipe from marthastewart.com, of all places.

Posted by Meg No comments:

There was a recipe floating around on Pinterest (I know, big surprise!) on butternut squash re-baked in it's own shell.  I played around with the recipe a bit (no cream or breadcrumbs needed here) and this is what I came up with--it's a keeper!  It's got a sweet/spicy thing going on that is perfect. 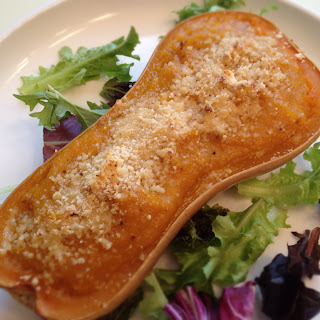 Preheat oven to 450 and place halved squash in a large pan with 1/4 inch of water on the bottom.  Cover tightly with foil and bake for about 35 minutes until tender.  Remove squash from oven, uncover and let cool until you can handle them.  Reduce oven to 425.  Use a spoon (I used a melon baller to scoop flesh out of the halves into a large bowl, leaving 1/4 inch border around 2 of the halves so that they don't collapse on you.  Discard the other 2 skins.  Add the coconut milk, S&P, chipotle powder, and cinnamon to the bowl and blend with a hand blender until smooth.  Place mixture back into the reserved squash shells and sprinkle with almond meal.  Bake for about another 20 minutes until starting to brown on top.
Posted by Meg No comments:

Not my own creation as usual, but another find from Pinterest (the website is maoomba.com) .  This was a bit too spicy for my girls, so if you have kids in the house, you may want to tone down the seasonings a bit, but I loved it! 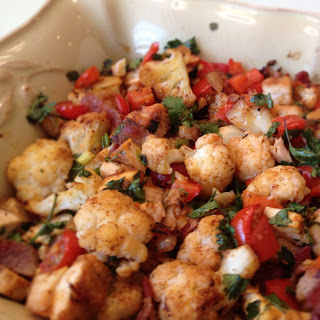 The girls were begging for burgers and I had some nice Brussels sprouts in the fridge, so this is what I came up with. 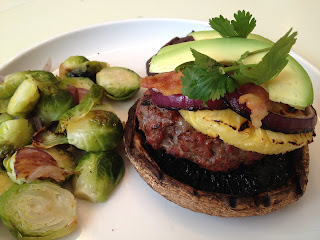 
Mix ground beef with spices and shape into 4 burgers (I usually put a "dent" in the middle and they don't shrink up so much.  I ground extra black pepper onto mine and sort of pressed it in--pepper corn crusted, if you will.  Grill over medium heat until done to your liking--mine took about 4 minutes a side.

While burgers are grilling, add sliced pineapple, onion and mushroom caps (I put the mushrooms on that little rack above the main one.  Turn when you turn your burgers.

To assemble, place a burger on one mushroom cap, top with pineapple, onions, bacon and avocado.  Place another mushroom cap on top.

Place Brussels sprouts and onions on a sheet of tin foil.  Sprinkle with olive oil and S&P.  Fold up foil so that it makes a little packet.  Grill over medium heat about 8 minutes per side (flipping once).  I should have added some cooked chopped bacon to the mix.  That would have really been delicious!
Posted by Meg No comments:

Desserts are few and far between in the Paleo world (which is usually fine for me), but sometimes you want something cake-y.  This was pretty darn good, but next time I think I'll add a little (maybe 3 TBS?) of melted coconut oil to the batter so that it's a little more moist.  But my girls loved it, so I guess that's what counts! 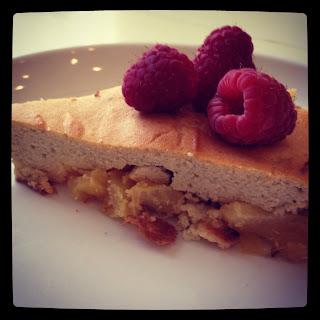 Preheat oven to 375.  In a saucepan, melt coconut oil.  Add pineapple and saute until it starts to caramelize, about 10 minutes.  Place in a pie plate, greased with a little coconut oil.  In a food processor, add coconut milk, coconut flour, vanilla, nutmeg and eggs and blend until smooth.  Pour over pineapple and bake for about 45 minutes.  Let cool 10 minutes and then serve.
Posted by Meg No comments:

For some reason, I had never thought about adding sweet potatoes to my mashed cauliflower until my friend Ellen recommended it.  The result takes care of that slightly watery thing that can happen with just cauliflower.  It was delicious! 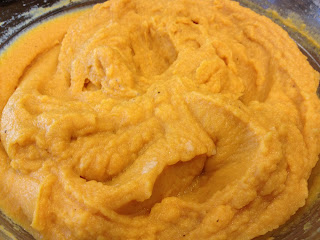 Bake whole sweet potatoes at about 400 degrees for at least an hour (or until nice and soft).  Steam cauliflower until very soft as well. Place both (peel the potatoes first) in a large bowl and add coconut oil.  With a hand held blender, puree until smooth.  Add S&P to taste.
Posted by Meg No comments: